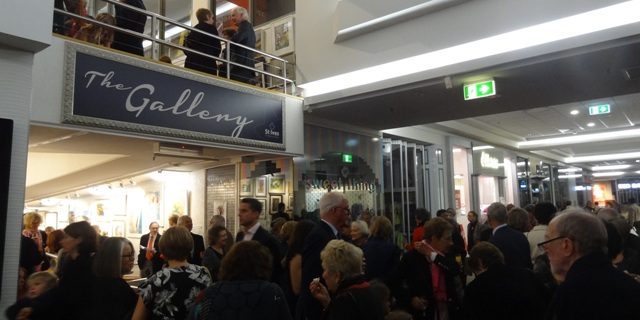 The KAS 50th Anniversary Awards night on the 24th July at

the St Ives Shopping Village Gallery on the Ramps had record attendance.

Guests dressed formally for the elite occasion enjoyed the beautiful artworks while sipping a cool drink and nibbling gourmet canapes.

The successful Artists were awarded with record value prizes with Rebecca Gray and Louise Sermon taking out the top prizes.

The Judges were Judith White and Alan Somerville. The Judges

overall comment on the exhibit reflected the quality of the works.

“It’s common practice for many judges to say the standard of work is exceptional”. Yet this is definitely the case in this 50thAnniversary exhibition. But what struck me more is the consistently high standard through all the sections; in particular the print making and drawing. I had the opportunity to see and hear comments and reactions of passing people – there was genuine pleasure and engagement. “  Judith White

“As usual, an exhibition up to high standard. All exhibitors have done themselves credit. Well done Ku-ring-gai Art Society!”       Alan Somerville

Malcolm thanks Robyne and her team.

Malcolm Carver thanked the many Society Members that had contributed to the exhibition’s success, too many to name individually, but with special appreciation to Linda Butler and to Exhibition Manager Robyne Birling and her first lieutenants, Suzanne, Jan and Bryan.

Record attendance at the Awards presentations.

Alister Henskins MP addresses the audience citing the importance of supporting the Arts in the Community.

Bendigo Bank’s Peter Millard updated on the Bank’s strategy of returning profits to the Community.