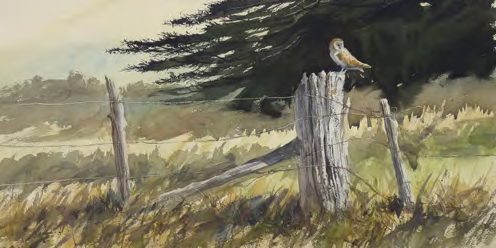 Painting Birds in the Landscape

This, our last workshop of the year saw us all painting birds with Guy Troughton. After watching Guy paint a willy wagtail, we had a go. Starting with the eyes and beak, we blocked in the basic colour and then built up tonality, sometimes splay- ing the brush to define the feathers. The background was kept loose. The standard of work was fantastic. Guy said the work produced was the best he had seen from a birds workshop! Well done everyone! www.guytroughton.com

Guy was born Surrey, England and began exploring the natural world and painting animals from an early age. After drawing his way through an Honours Degree in Zoology at London University, he started to paint and draw professionally. Painting in oils, acrylics and watercolour but with no formal art training, he acknowledges the profound influence on his work of New Zealand’s Ray Harris-Ching, and the American, Andrew Wyeth. Between 1982 and 1996, he undertook commissioned illustration work for major British publishers and conservation organisations including the Royal Society for the Protection of Birds, Cambridge University Press and the World Wildlife Fund. He illustrated twelve monographs on British animals as well as many other natural history publications.

The connection between man and nature is a continuing theme. Lenny Ann Low, a writer for the Sydney Morning Herald commented on his work: ‘in each of Troughton’s delicately rendered paintings a spell has been cast and a lull has descended on a busy Earth’. Will Paulson, a leading American art appraiser recently wrote: ‘the exquisitely fine detail and the intense yet blended colouring is wonderful’. He exhibited in group shows at United Kingdom galleries including: the Tyron, the Mall Galleries and the Royal West of England Academy, holding his first solo exhibition in 1993.

He travelled extensively in search of wildlife subjects, moving to Australia in 1997 where he has had five solo exhibitions and exhibited in more than 30 group shows. A finalist in The Waterhouse Natural History Art Prize, the Blake Prize and the Mosman Art Prize, where he won the People’s Choice in 2005, his watercolour paintings have also been selected for the Salon de Refusés.

He is represented in collections including: the Massachusetts Audubon Society; and The Fauna and Flora Preservation Society. Significant commissions include: one from the United Kingdom’s National Trust Foundation for Art. In 2005 he was invited to teach watercolour at the Julian Ashton Art School in Sydney. Member of the Australian Watercolour Institute since 1999. Member of Wildlife Art Society of Australasia.