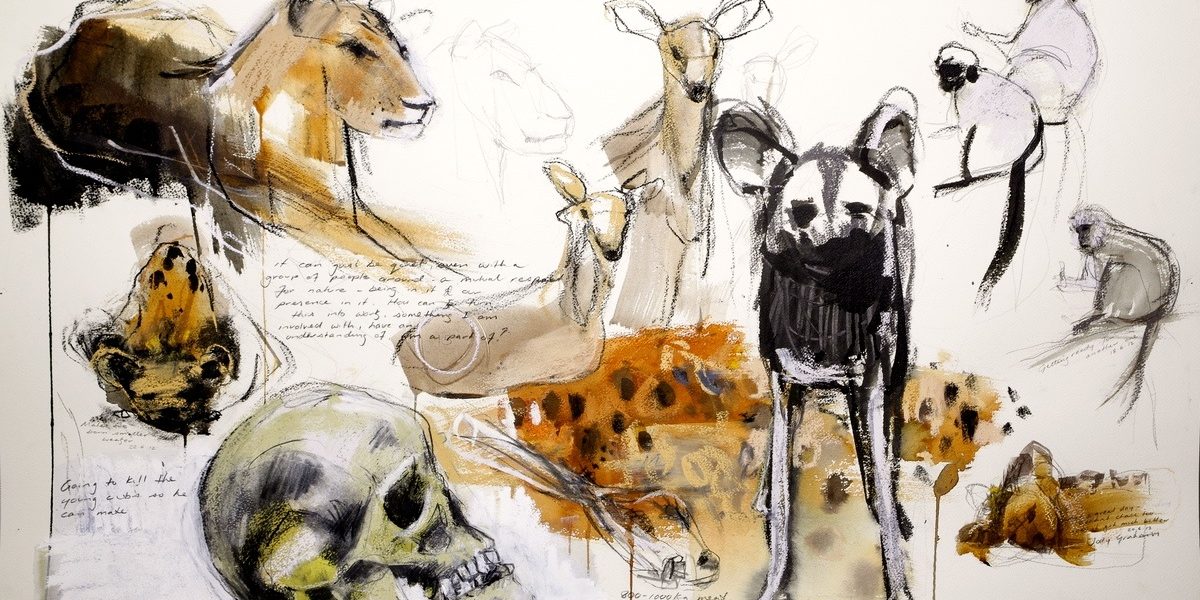 “I’m always excited about drawing” were Jody’s opening words of what proved to be an action-packed demo. Starting with a slide show of her works she told us of her journey from part-time working Mum and very tentative artist, to full-time competent and confident artist.

The first major step in her transformation came when she was accepted into the Kedumba Drawing Prize which is by Invitation only. She admits she was very scared and drew every day for 6 months leading up to the Exhibition. Hoping to produce at least a couple of works with which she felt really happy, she ended up with 2 being accepted. This gave her the boost of confidence she needed and she hasn’t looked back.

Jody made a conscious decision to choose subjects that were meaningful to her, these include construction sites and industrial and architectural themes. These themes still dominate her work but after a trip to Africa she was moved to produce some beautiful animal works.

She has recently moved into a bigger studio at May St Studios in the city, which has allowed her the freedom to produce her large (126cm x 114cm) charcoal & pastel drawings of inner city buildings usually on Arches paper off the roll. Jody loves to explore the environment in which she works and to create an emotional response rather than a purely literal copy of what she sees.

Jody then gave us a demonstration of how she achieves this. Her subject was the Sydney Dental Hospital and she used some photographic reference but also added things she remembered were there but not necessarily in the photo. With bold gestural strokes the building soon came to life. She also uses paper towels to smudge over the main area and then works back into it using a very large chunky rubber to create light. She works vigorously and intensely and to take a break and relax, she does what she calls ‘bad drawing’ where she allows herself to just play with a drawing and do things she knows aren’t right but it’s fun.

Jody never leaves home without a sketchbook and a “Lamy” pen, which can be used for line drawing and a wash can be achieved with a bit of spit on a finger if you don’t have water available. She brought in one of her large sketchbooks which are jam packed with everything – ideas; research; sketches; photographs; floor plans for exhibitions and anything else related to her Art.

It was a very inspiring and exciting evening full of free expression and emotion.

Jody Graham is a Sydney-based artist whose work encom- passes drawing, mixed media, sculpture and installation. Jody is known for her bold, expressive urban land- scapes, exploring themes of imperma-nence, loss and erasure and “documenting what’s happening before our eyes.” 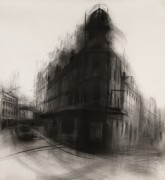 At the core of Jody’s practice is drawing. She enjoys the directness of plein air sketching on site as the basis for larger works back in the studio and loves to make candid pen studies of people in public places. “Drawing encourages me to keep looking, searching, and to really see things.” Selection for the Kedumba Drawing Collection by John Olsen in 2003 and by Jenny Sages in 2008 proved a turning point in her practice. Solo exhibitions in 2011 and 2013 focused on urban and industrial landscapes with recent works becoming larger, starker and more abstract. An installation inspired by her visit to a South African township won the Blacktown City Art Prize (2013) for sculpture while her African Animal Studies was winner of the drawing award for the Waverley Art Prize (2014).

She has recently moved into a larger studio space in St Peters and is excited by her latest project that will push her practice into new territory.