Neile Joseph was our Guest Artist at the November 2019 Meeting 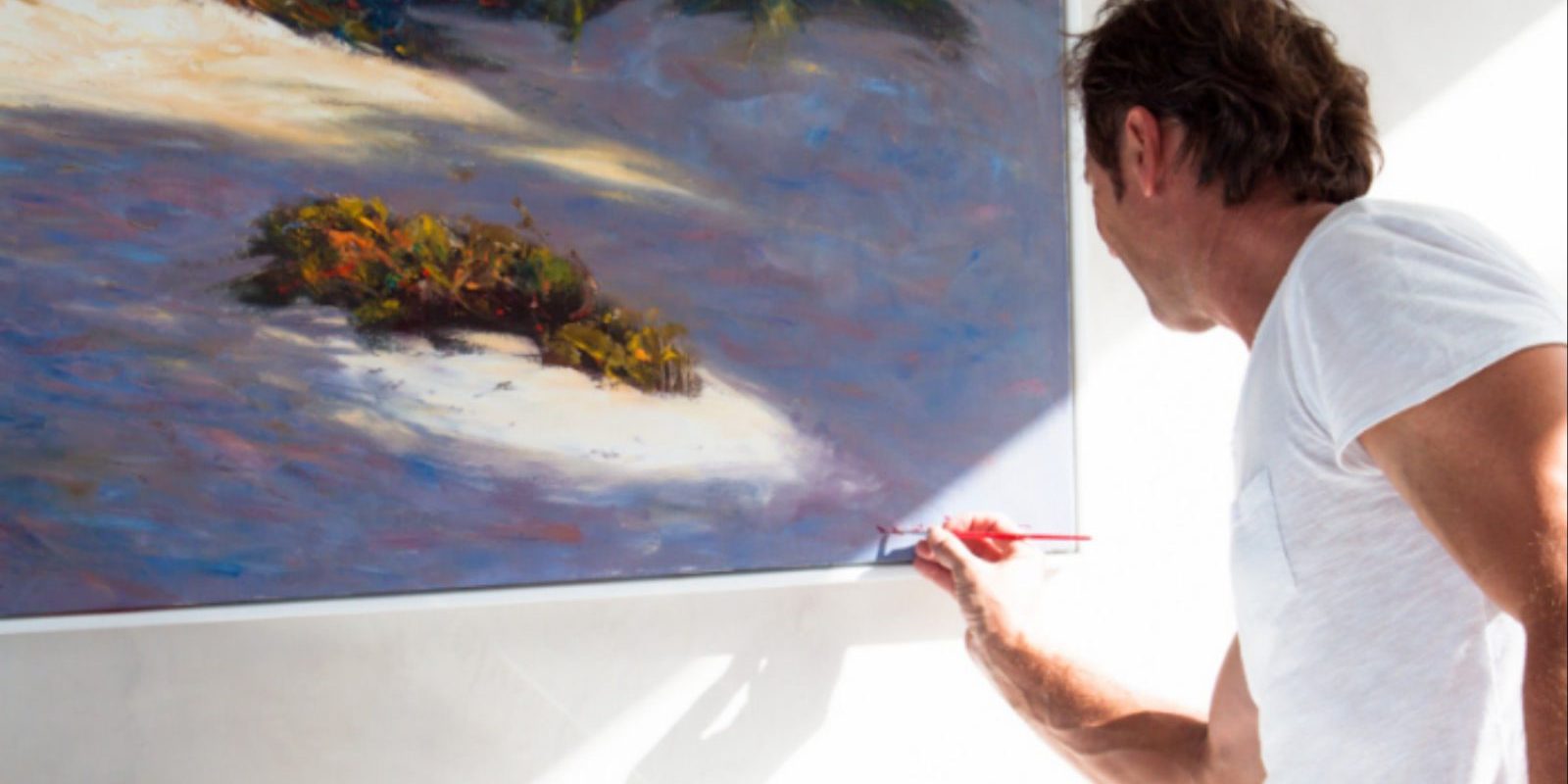 Neil thoroughly entertained us all for a most enjoyable night.

After outlining his amazing background and his fascinating and successful journey into the Art World, Neil proceeded to demonstrate his skills to all with a beautiful oil painting.

Art involves exposing our deep thoughts and passion and takes courage – so hats off to you” –
Neale told us at our November meeting. Neale’s journey as an artist is unusual. In primary school
he won all the art prizes and clearly had a gift for art. The other kids would watch him draw and
paint. When he was in year 7, his art teacher – Miss Smudge (no less), told the other kids to
watch her and not Neale because he wouldn’t amount to much!
Neale didn’t take up a paintbrush again until many years later. He studied technical drawing at
TAFE and became a carpenter. “I did paint 2 or 3 paintings a year. Aunty Alice would buy them.”
In his late 20s, with a pregnant wife at the time, he realized that he did have a God given gift and
talent and should use it. Overnight he ceased being a carpenter and became a full time artist. For
the first three years he went out every day and painted en plein air. “Painting plein air is not easy.
It can be challenging.” Neale told us a story about Fred Williams who was painting plein air when
a group of hikers came past and stopped and looked and commented. Then another group of
hikers came through – also stopped and gave advice. At that point Fred decided to pack up and
go home!
Neale’s work sold well at galleries and exhibitions and his career has never looked back. He has
had sell out exhibitions at Holdsworth gallery, Heart of Australia NSW, and as recently as 2016 at
Latitude Zero, a resort in the Telo Islands.
When exhibiting at a Melbourne Gallery, he saw an Arthur Boyd painting which he wanted to buy.
It was $12,500. Too expensive for him at that time. In a strange twist of fate the gallery rang him
later to tell him that Arthur Boyd had been in, loved his painting – and bought it! Boyd said that he
had captured the light and the scene had brought back memories for him.
Neale has owned and run galleries – most recently at Crown Resort Terrigal, but lately has been
doing almost exclusively commissions, which he generally paints in his studio. In September
2020 he will be holding a one man exhibition and so will head out for more plein air work next
year to prepare for that.
While we were viewing a video depicting Neale working plein air and in the studio working on
extremely large works, Neale kindly demonstrated for us. With unbelievable skill and dexterity,
Neale completed a seascape in oils. He used a painting he had painted earlier as a reference.
His free and confident brushstrokes were an inspiration. He initially ruled a straight horizon line.
He then painted clouds at sunset above the line. “I am strategic in where I put a cloud Clouds are
important to draw the eye to where you want the viewer’s eye to go.” In this case, the eye was
lead to the breaking of waves on the beach.
Living on the Central Coast, Neale is a keen surfer and spends a lot of time at the beach. He
knows it well. “Don’t be too particular with waves. They are moving and can be a bit more blurred
with movement.” Neale generally paints on MDF laminated board from Bunnings, on to which he
glues canvas with acid free glue.
When painting in the studio, always use a warm light or daylight, not a cool white light as it brings out the cools too much. He uses fingers from time to time to smooth an area or blend something in. He doesn’t use medium. He buys his art supplies from ArtSupplies Australia at Hornsby. “But it is sometimes good to use different things. It’s not what you use but how you use it. Each and every person is different.
Others don’t see things the way you do. Each person has a unique gift. Don’t just use observation but also interpretation. It’s in your heart. If nothing else feel encouraged because you are unique.”
Well we certainly loved watching Neale paint with his unique gift. And we feel very honoured because he doesn’t normally do demonstrations – so we were very lucky!

Thankyou Neale for coming down from the Central Coast in order to demonstrate for us.

Neale sent a photo of the finished painting (top right image on the November Newsletter), a few days after the demonstration to show the extra work he’d done to complete it.“…the night really was just blocked in with colour and the 2nd stage it starts to take shape. I wanted to encourage people so they didn’t think wow we should all do an artwork in 40 mins… there’s no prizes for how quick when people normally ask me how long a painting takes I say oh usually takes about a week and 58 years… so it’s probably an encouragement to show it certainly was far from finished…”

Neale Joseph is a painter whose artistic oeuvre has developed out of a principally plein-air
tradition. 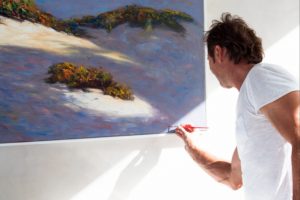 Born in Sydney in 1961, he presents the viewer with a visually dynamic yet painterly vision of the Australian landscape that fluctuates between representation and abstraction.
Neale has exhibited regularly in both solo and group exhibitions Australia wide and was invited to exhibit at Parliament House in Canberra in 2008.

His works have hung in exhibition alongside the likes of Arthur Boyd, Brett Whitely and John Olsen.
Neale has won both the Veuve Clicquot and Great South Land Art Prizes and has garnered acclaim from Australian and International icons such as Arthur Boyd, Pro Hart, former United States President George Bush Snr, and former Australian Prime Minister John Howard.

The Exhibitions are held at “The Gallery”, in the St Ives Shopping Village.

An Autumn and Spring Exhibition is held in March and October.

The Awards Exhibition is held in July.

Exhibiting Members are entitles to enter the exhibitions.