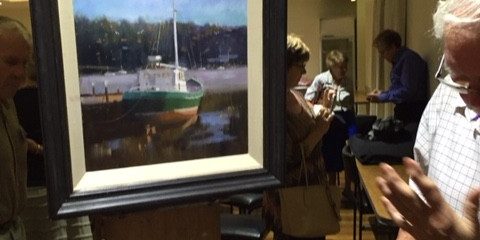 John completed a wonderful Oil painting in one hour at the KAS meeting before an impressed audience.

Our guest speaker, John Perkins, hopped straight into his demonstration – painting a lobster boat on the Tamar river. Whilst holidaying in Launceston he was at a café and noticed the boat on the river and the changing light. To everyone’s amusement in the café he jumped up every few minutes from his coffee to take another photo.
John, President of the Royal Art Society, works as a signwriter during the day – one of the few to do gold leaf lettering. He thus mostly paints in the evenings in his studio. He normally takes about two sittings from go to whoa for an oil painting.
He suggests doing some sketches on location but not many, and using some photos. “With experience you learn to paint it in the studio”. He likes to have a photo which is in the same proportion as the canvas, (not the same size) and he holds the photo in his hand whilst wielding the brushes in his other hand.
With boats John takes some care over his initial drawing. “I am a bit of a fanatic to get boats right, not floating out of the water. I know bugger all about boats, but I love copying and painting them”.
As a first step he advises: “Try to loosen up a bit. Cover the blank canvas. I use a little bit of turps, ultramarine blue and burnt sienna, sometimes adding a bit of permanent rose. Mix up a reasonably dark colour and start to draw, painting wet into wet. “Even though you have the drawing there you are still drawing right up to the last brush stroke. That’s the fun of painting”.
“ I prefer never to mix enough paint. I come back and mix more and that gives more variety”.
After doing the sky he starts putting in the dark areas of tone. “To make things stand out you have to make things darker. Soften edges but don’t blend. Always get rid of hard lines in the early stages. “It’s very important to get the tone dead right otherwise the whole painting doesn’t work.” He doesn’t use white in the early stages – “If it gets into darks you have strife.”
John likes to work quickly initially, then he changes his glasses so he can see, and slows down for the more detailed work.
“Avoid things falling out of the painting. Anything too near the edges draws you to them so be careful of them. Any lettering, like the name of the boat, should be just unreadable so as not to pull the eye straight to it. Try to keep the eye across the whole painting using tone”.
A few dashes created small yachts in the background and the houses on the hills in the distances (“just put in a few…dots and dashes make a heck of a difference in things.”)
The mast and ropes were done masterfully with a single brush stroke. (In the studio he uses a resting stick) and a few seagulls added. (He loves Edward Seago’s seagulls.)
The fun part at the end – clean the brush out then add a few turquoise dots, then jump into the red – a few red houses or something red on the boat looks good.”
It was terrific to watch such a skilled artist at work. Thank you John.

At the young age of fourteen, John Perkins joined Henry Rousal as an apprentice sign-writer. This is where he met a well-known portrait artist Roy Rousel and a pub mirror artist Stan Denford, both of whom cultivated John’s early interest in and love for art. He was tutored by Graeme Inson using the Meldrum Principals of Tonal Impressionism. John has become a well-known artist with his work represented both nationally and internationally. He has work currently displaying in the City of Sydney Library and many Municipal Council and private collections in Boston, England, New Zealand and

Carmel, California. John is widely recognised as a Traditional Oil artist specialising in Still Life and Landscape paintings, he has, however, over the years pursued various other subjects – this has led to him being renowned for his Marine and Streetscape paintings. John is a Fellow and a Council Member of the Royal Art Society of NSW and is sought after by Art Societies and private organisers for his demonstrations. John has tutored at Charles Sturt University in Bathurst, Grafton Artsfest, the University of Western Sydney (Richmond Campus) and at the Combined Art Society of Sydney’s ‘Art in Action’. He is a Life Member and former President of Drummoyne Art Society. John was also the Inaugural President of the Combined Art Societies of Sydney.