Our Guest Speaker for the KAS June Meeting was Alan Sommerville 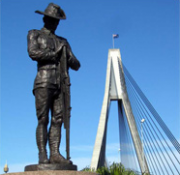 Alan can’t remember not drawing. He lived on the land and drew horses. He drew quickly and sketchy and was told by his father that one day he would have to learn to finish his work! He did finish his landscapes. He also tried out egg tempera (had plenty of eggs!) but couldn’t be bothered with it, however the egg tempera technique helped him later with his oil painting. Alan became a landscape painter for a few years before turning to sculpture relatively late in his career. He had always wanted to do sculpture earlier in his life but didn’t have the opportunity. When doing commissions he likes to work with people with the same eye or vision. These collaborations results in works which are full of dynamic energy and emotion. He always starts with sketches then usually makes a Marquette to show the plan of larger commissioned works. For his sculptures of the Soldiers on the Anzac Bridge which are 4.2 metres tall, he made a Marquette at 1/6 scale to get the proportions right. Then for the full size works, he started with an armature or framework to hold them up. The main frame is made of steel, then mesh and then plasticine and built on a plinth that was designed to hold fifty tonnes. The first coat of plasticine gives the basic form, then he builds up with more plasticine. He adds oils in to the basic plasticine to make it softer and easier to mould. It was very demanding to get movement in such a rigid pose. To get the works to the foundry they had to be transported in pieces. Alan uses the Lost Wax method of casting which involves making a mould from the clay form in cut into sections and then cast in bronze. The last time you can alter a bronze is at the wax stage, it can’t be altered after that due to the mechanisation of the process. The pieces are then welded together. All the welds then need to be filed back to create a smooth finish. As there is no lead in our bronze now, the metal is much harder than it was before and can’t be worked with a chisel but must be done with machines. The thickness of the wax equals the thickness of the bronze, so the legs are made very thick, with the body about 12mm. The Rifles are 2.6 metres long. Massive rods go into each sculpture so they aren’t damaged by wind over time. Over a tonne of bronze was used in construction. It took Alan 4½ months to create them plus another 4½ months at the foundry. It was a particularly challenging Commission as he had to deliver on time or be penalised on a daily rate. It was a very fast time for such a large project. When they were finished he told the Press that the Kiwi is 2″ taller than the Aussie. To protect the finished works he uses a micro crystalline wax which should be done every 18 months or so because Bronze is 90% copper so it tends to go green. When discussing his latest works Alan says his inspiration continues to come from his artistic background. He tells all sculptors to draw more, to solve many things at the drawing stage. He still draws and paints regularly. Reflecting on his father’s comments when he was young, he said if he had a chance, he would create work that is even less finished now! Thank you Alan for giving us such intriguing insight into the wonderful world of sculpture.

Alan Somerville is a figurative artist, an unashamed Modernist, whose sculptures and drawings are steeped in the expressionistic style of Rodin, Degas and Daumier. Somerville’s grasp of shape and form is as self-evident as is his dynamic depiction and romantic notion of the human anatomy. Poetic territories are explored, and these qualities are borne from his uncompromising dedication and understanding of the physical structure, movement and expression are vitally important to Somerville. His work seeks to capture a dignity which emanates within, the subject and is never static. 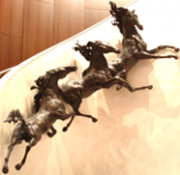 ille’s body of work is both broad and critically acclaimed. His numerous public works include the two iconic Bronze Diggers on Sydney’s Anzac Bridge, the Bull at World Square, Sir Henry Parkes inCentennial Park, Sir Roden Cutler, at Manly, and the three bronze sculptures at the Australian War Memorial, plus countless private commissions in Australia and abroad