Our Guest Speaker for the KAS June 2016 Meeting was Chantal Mahoney.

Our guest artist, Chantal Mahoney, delighted us at the last general meeting with short video

presentations of her wonderful work together with a demonstration of synaesthesia.

Born in Toulouse, France, Chantal originally studied music. After coming to Australia she

completed a degree at the National Art School. For over 11 years she has worked at her studio

at Headland Park, Mosman. The studio, although a working studio, welcomes the public to look

Chantal will work on a series for a period, and then change. Initially Chantal painted people in

movement –stunning pictures of ballet, tango and flamenco dancers. She would video people

dancing, for example at a rehearsal, and then pause the video and make drawings, then little

Following a visit by her cousin from Paris who was a performing clown, named Mme Bettina,

she created a series titled Mme Bettina. This in turn led to an interest in makeup and masks

and she produced a series of African faces made up for tribal ceremonies. This was followed

by an exploration of European use of mask – the Venetian masquerade using paint and collage.

Earlier series were all oil paintings. Then, reflecting a period of sadness in her life, she used

black and white pastel and white acrylic with black ink. Slowly the colours came back.

After being given a piano accordion she and her partner, who played the banjo, created a little

band called Sacrebleu. This led to her next series which explored stained glass windows, the

cutting of spaces, and collage and music.

music. She, with others, have performed at Manly Art Gallery and other venues demonstrating

synaesthesia – where one sense evokes another. For example when hearing a certain sound

induces the visualization of a certain colour. “So you can see the music and hear the colour”.

Chantal demonstrated this for us. Painting to music she applied colour to a large disc in

response to the musical notes being played. It was a very beautiful performance.

Chantal’s advice: “Free yourself, experiment, paint what you want, have something to say,

learn what you want to say.”

As your life changes, so too will you art. Thank you Chantal for such a stimulating evening. 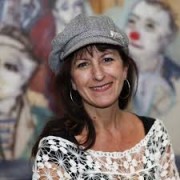