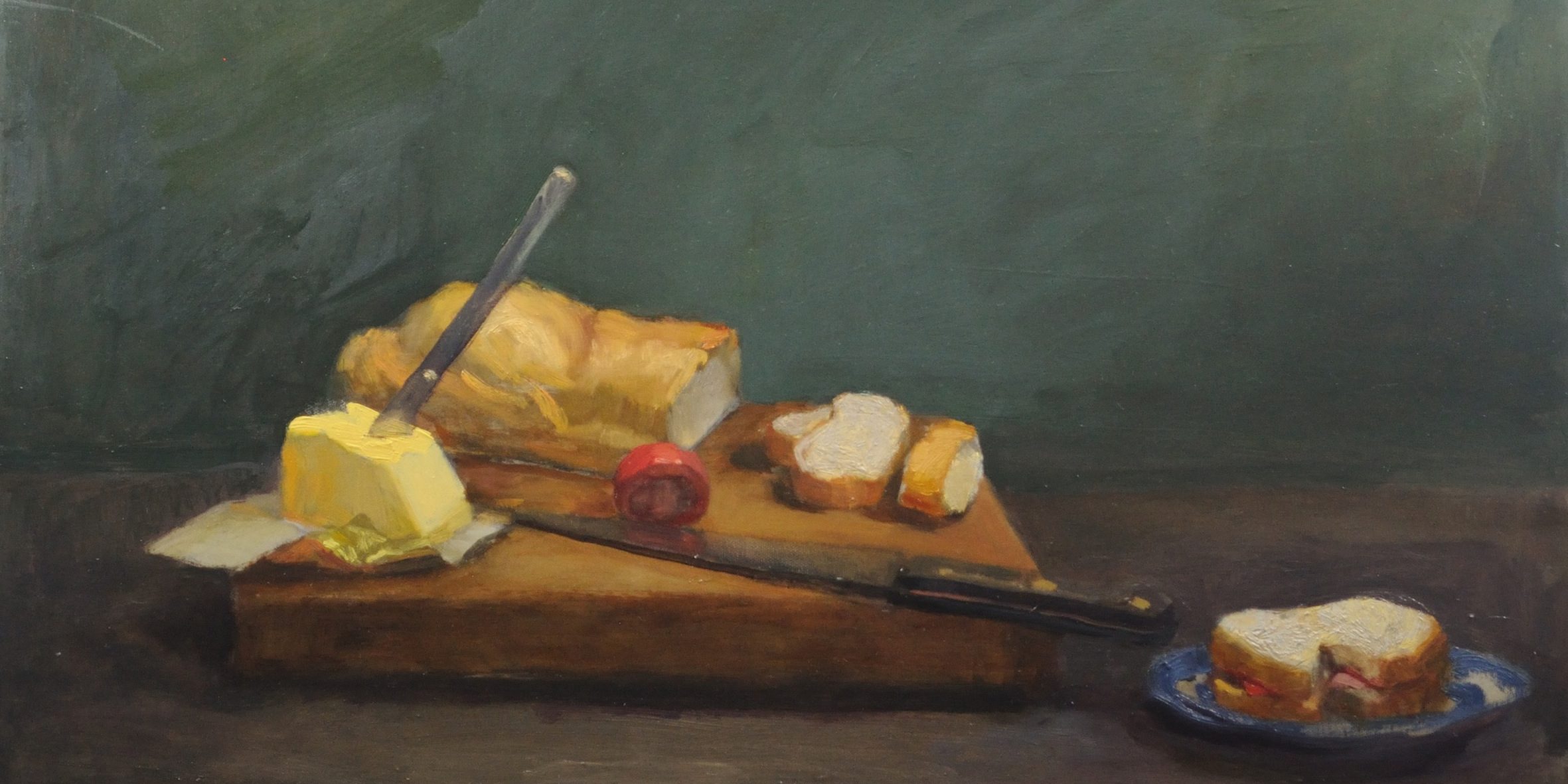 Our guest artist at our August general meeting, Matilda Michell, paints in the classical tradition, but in a contemporary and modern context.  She loves the famous French still life painter, Chardin, and uses many of his techniques in her own work.  He captured the beauty in what were at the time ordinary everyday objects.  Those objects today would look anything but ordinary, and so Matilda might paint instead packets of flour, milk bottles, keys, coins, tin cans – things with contrasting shapes and interesting surface textures that people use everyday, but perhaps overlook their beauty.

Matilda set up an eggplant, partly sliced, an apple and a glass jar with directional lighting. As she painted she explained to us her thought processes.

Set up and composition

Matilda spends quite a bit of time on set up and lighting, as a good sense of form is paramount in classical painting.  She had prepared her canvas with a mid-tone monochrome ground chalky ground – white calcium carbonite or calcite.  It gives the ground layer some absorbancy and doesn’t get heavy with oil too quickly.

She starts with a grid of diagonal lines, a centre line and 1/3 and ¼ divisions.

“The vertical centreline is most important.  You must breach that or you’ll have two paintings.”

As with old fashioned scales and weights – balance is important.  If the composition has something heavy on one side, a tiny thing on the other will even the weight.

Matilda commenced by drawing in charcoal.  “When I am drawing things, even when they are round, I use a series of straight lines to define them.  It is a more accurate way to draw and gives more sense of a block.  It is easy to round off later.”  She likes to draw in the axis line when things are symmetrical to make sure they are even.

Matilda mixed a lot of shades on her palette before beginning.  “(Premixing the colours) keeps colours clear while working, and you can get a bit of a flow on while you’re going.”

“I work from dark to light to retain transparency in the darks.  In classical painting transitional darks are more transparent and the lights more opaque.”

Working on the eggplant:

You are not obliged to paint everything in full chroma.  The green stem of the eggplant is not important for the picture so I will play it down and let the apple be a more intense colour.

Be careful to have a clean brush for the face of the eggplant.  Don’t muck around too much. The texture of the paint will provide variation.

The focal point will always be the area of highest tonal difference.  If you inadvertently have an area of high tonal contrast somewhere else, no matter what you do the eye will go there.

Highlights on a shiny surface are usually the colour of the light rather than of the object itself.  The eggplant highlight is a bluish colour.

Working on the apple:

Start with the darks and put in transparently.  Form is important so for the moment ignore the variety on surface – pretend it is just a red apple initially.  Focus on getting form right then add yellow etc afterwards.

Work from dark to light – but sometimes give yourself an indication at a light bit of where you want to get to to bridge the gap.  Otherwise everything can get overly dark.

Try to use as few strokes as possible.  Train yourself out of just touching over a given area again and again.

Try to think of overall structure of form.  Where the apple turns from top to side, I have to make a difference in how I put on paint otherwise it will seem flat and not enough volume.

When adding the yellow variations on the surface, they must follow the same light and dark structure as the rest of the apple – eg a darker yellow in the darker sections.  You might have to edit things sometimes if there is a really big (light) yellow patch on the dark side.

Working on the table top:

Where the back of the table meets the background – should be transitional so as not to draw too much attention to that area.  In the front of the table I use thicker paint and a warmer colour so that it stands forward from the background.

The direction of strokes is really important – for example you don’t want too much horizontal movement or it will shoot you off the edge – use vertical strokes.

In classical still life painting, Chardin often would break the edge of the table to prevent too strong a horizontal.

Working on the glass bottle

You really have to paint the background and the glass at the same time – otherwise there will be too much hard edge.  Work out a couple of places where there is a lot edge.  Always prefer a suggestion with glass – the eye will fill in.

Things like silver and glass – think of them as being quite abstract and let go of the normal rules and trust it will work out in the end.  Use more fluid paint.

Look for a pattern in consistency in the highlight that belong to your glass.

Matilda painted a marvelous still life in an incredibly short time frame, whilst talking to us at the same time! Quite an achievement, thank you.

Matilda teaches at Art Est, Leichhardt on Friday mornings and Saturdays, and you can check out her work on her website www.matildamichell.com

Matilda graduated from the National Art School in 2008 with a Bachelor of Fine Arts, majoring in painting. Since graduating, she was the overall winner in the Waterhouse Art Prize, the winner of the Waverley art prize (drawing section) and the winner of the Glebe Painting Prize. She has been a finalist in many other prestigious art awards including the Doug Moran Portrait Prize, the Portia Geach Portrait award, the Black Swan Prize for Portraiture and the Kilgour Prize. During her time at the National Art School she was the recipient of a Will

iam Fletcher Foundation Grant and the Pata Paris Studio Residency Award. She won the Art History and Theory Prize in both first and third year, and was highly commended in the John Olsen prize for Figure Drawing and the Arthur le Gay Brereton Draughtsmanship award. Matilda also has a Bachelor of Arts, majoring in Media Arts and Production, and a Bachelor of International Studies from UTS. 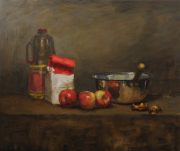