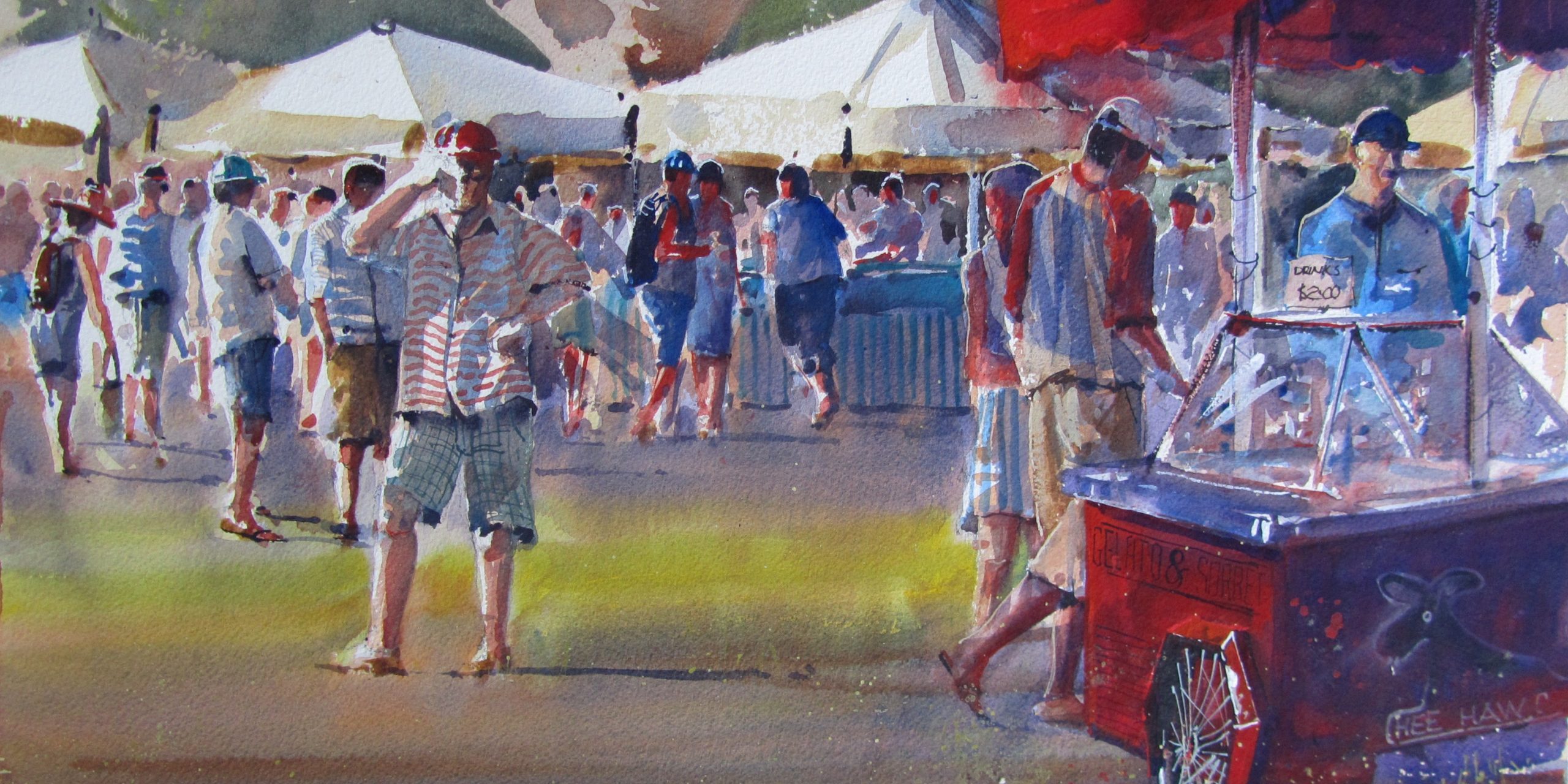 Our Guest Artist for the March meeting was Julie Simmons

Julie impressed the KAS AGM audience with an amazing watercolour painting demonstration of a busy market scene with many figures. Standing up to the easel, Julie freely and quickly laid  the underpainting of sky, background and figures.

Using only a limited palette of colours and a series of rapid brushstrokes from a variety of brushes, the numerous negative shapes and the final touches of “jewelry” brought the painting to life.

In addition to being CASS Artist of the Year 2015, Julie also won the Waterbrooke Prize the previous week, she shared with us one of the study paintings for the awarded work.

Julie chats with KAS members after the demonstration

The Night Markets, the finished work

Thank you Julie for a wonderful demonstration!

….and, from our very impressed Official Meeting Reporter…

Julie Simmons was welcomed with much enthusiasm following our Annual General Meeting.

Julie is both an entertaining speaker and an accomplished painter, having recently achieved the award as CASS Artist of the Year in 2015. Recently her success in gaining the Waterbrook Prize in 2015 has also been added to a string of awards both in oil and watercolour mediums.

Very generously she shared a number of larger works with members, who were all in awe of the beauty held aloft to the audience. A great variety of subject matter particularly in watercolours reflects the close affinity she has around her home in Castlereagh NSW and from her travels around Australia.

Not one to talk so much about her many achievements but with time short Julie set up her easel under the camera with large screen backing for all of us to appreciate the array of watercolour brushstrokes as a fine demonstration was performed in our midst.

Beginning with a pre drawn image of ‘Market Day in Broome WA’ a very challenging scene was set with a great number of figures overlapped around a group of stalls. The first wash was pale and broad using the white of the paper as highlight. Using a favourite mop brush and a watery wash whilst urging us to hold back on detail until the end. The shapes created a variety of edges, hard edges to define detail balanced yet soft edges enabled other detail to be lost in the background. A variety of colour is used in the washes, with some other colours bravely thrown in and allowed to diffuse in its own way.

The busy scene appeared particularly daunting though Julie confidently laid down further washes from top to bottom that defined the shadow shapes of various figures, tents trolleys through attaching and connecting shapes.

Her colours varied on 300gsm Arches Medium paper with favourites such as French Ultramarine and Permanent Rose, sometimes Burnt Sienna. The addition of further strategic darks, enhance and enlivened the scene with great clarity of light. Raw Sienna was another favourite and the use of premixed greens was discouraged.

Julie made watercolour painting look effortless and encouraged us all persevere with this the most difficult but beautiful medium of all. Her generosity of helpful hints and response to questions made it all a very enjoyable occasion.      Thank You Julie

Born in western Sydney, Julie’s early interest in art was fostered by her mother. She was constantly drawing on anything and everythingwith charcoal, pencil and cheap poster paint. Her first painting was exhibited when she was twelve.

On leaving school she worked in an art studio in Sydney where she was taught all the basics of good drawing and the application of fresh and free washes and the importance of tonal values. Julie worked in the studio for six years and in that time would produce work ranging from food to perfume to furniture. Julie continued to freelance for a number of years whilst raising her family. During this period she became enamoured with pottery and completed two diplomas at Penrith TAFE. She continued on this path for the next sixteen years, working from her studio at Castlereagh and building and firing a woodfired kiln for a number of years.

In 2004 Julie attended a week long watercolour workshop in Bathurst and was instantly inspired to start painting.

Julie is now a multi-award winning artist who paints in oils, pastels and mixed media but it is the medium of watercolour that excites her the most. She also paints en plein air on a weekly basis as well as on numerous week long painting trips each year.

Julie is an Associate Member of the Royal Art Society.