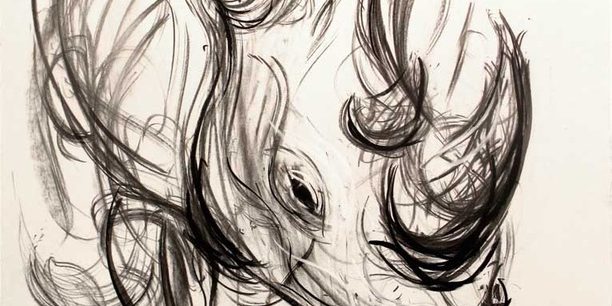 from the AGNSW, which enabled him to work in a Paris studio and live overseas for some

years. “The best thing was the museum pass which enabled me to visit the museums without

lining up and after hours access. I went to the Louvre about 60 times!”

Michael works mostly on paper and often builds up work in layers – maybe he starts with ink,

adds gesso, scrapes back, adds charcoal, adds pastel “Don’t give up on anything, all that

history (in the image) seems to build up and become interesting.” He paints with gouache when

in the field, and his drawings often lead to paintings when back in the studio.

“Don’t try to create the one great masterpiece. It is better to build up a body of work.”

Michael showed us his many drawings of landscapes from as far afield as the Flinders Ranges,

Most of his drawings are large, fast and immediate. He suggests also working small. “Cut the

paper up into 20 cm squares, don’t be precious or expect too much, and do about 25 a day!

“We were wowed by Michael’s drawings of animals whilst artist in residence at Taronga Zoo. “I

did lots of drawings – mostly in the heat of battle and I spent a whole day with a rhino. I had lots

of access after everyone had gone home, and sometimes animals you hadn’t noticed suddenly

Michael also enjoys figure drawing. “As a student it is the fastest way to learn to draw. It is a

lovely way to experiment and find different ideas.” “Sometimes a first drawing can be very

descriptive. With the second drawing (of the same subject) you are more likely to take liberties,

Michael demonstrated some of the materials and techniques he favours. He held 5 pencils at

once and drew a still life. “The constant contact with the paper allows you to isolate rhythm and

wrap the form in wire. When you push heavily at the bottom, weight happens. “There were no

outlines. Similarly using tone. “Don’t burn a bridge at the start with a line. Start softly with tone,

use the side of your hand and push to play down bits. Then draw the light on using a kneaded

eraser, or cut in a light edge with an oblong eraser. “We are addicted to objects and sometimes

A great lesson from Matisse is that patterns push solid objects. Another method was one

favoured by Da Vinci – create a field of white with white pastel before starting to draw. Then

draw with solid graphite and it behaves as if it were charcoal with a softened painterly effect.

Chunky AS, Sennelier or Schminke pastels all work.

draw! Michael will be conducting a workshop on drawing and mixed media for us on 14th May

next. Book online on our KAS website. (He is also taking a group to the larapinta trail in July.

Michael Herron has been painting and drawing for 30 years and teaching for last 20. At the age of 22, after studying for 5 years at both Meadowbank TAFE ’84-’85 and City Art Institute (now COFA) ’86-’88, he won The Sydney Morning Herald Travelling Art Scholarship in 1988 and – combined with the Dyson Bequest from the Art Gallery of NSW – stayed in the Mora Dyring Studio at the Cite Internationale des Artes in Paris and travelled for 2 and a half years in Asia, Europe and America.

On returning to Australia, Michael was  involved in a number of solo and group show,s including a solo show at first draft in 1997, before once again travelling in Asia and Europe for 18 months.

He exhibited with the Tim Olsen Gallery  2005- 2010  where he had 4 solo exhibitions and  numerous group shows.

Recently his works have been based on en plein air painting of the landscape, the sense of space and abstraction in the Flinders ranges, which has been charged with his previous focus on  gardens and landscape gardening and much smaller spaces , often like Edna Walling or Capability Brown.

In 2010 Michael was invited to Exhibit in Kedumba Drawing Award and in 2011 he was involved in the Taronga Zoo Artist in residence program. In 2014 he was include in the Rick Amor drawing prize in Ballarat.

There have been numerous artist trips to the Flinders Ranges, Cooma , Rylstone and the north coast of NSW.

Michael has been has been hung for the last 3 years in the NSW Parliment Plein Air Painting Prize.

Michael has taught and run workshops and classes at numerous schools, community art centres and art societies and has  guest lectured at COFA and TAFE . Most recently convening a 3 tutor 3 day workshop at Cockatoo island in Sydney harbour.