Guest Artist for the May 2016 meeting – Kasey Sealy. 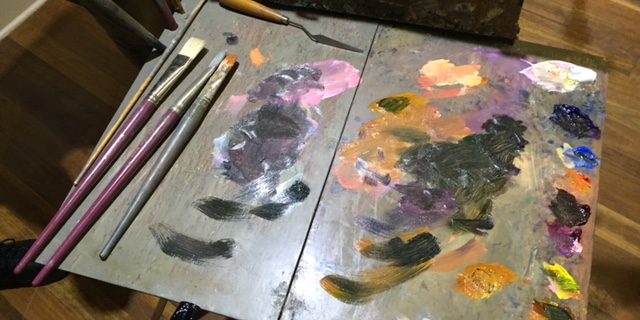 Our Guest Speaker for the KAS May 2016 Meeting was Kasey Sealy. 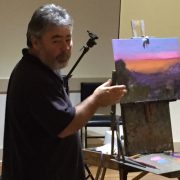 Kasey Sealy painted in his wonderfully competent manner an oil painting of the view from his studio window, looking out over Berowra. He had already done a small oil sketch of the scene, using gum turps. “The most important thing is to say to yourself: ‘why am I going to paint this picture?’ and keep it in your mind for every brush stroke. In this picture I am trying to capture the last fleeting light.”

and as they use traditional formulae in their paints. He thinks modern oil paints have deteriorated as alkyds and fillers are now added to make them dry faster. “I like the reverse. I sometimes add clove oil to the paint to keep it wet. I like to paint wet into wet.” Kasey makes his 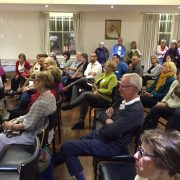 “I like to firstly cover the canvas really quickly – In 10 minutes. Just sketch in, dabbing the big shapes. Worry about detail later on. Work with a brush for darks and another for lights, a bit like doing a turpentine watercolour. I’m more interested in the values of things, not necessarily colour”. He finds that covering the canvas gives him a colour to relate to, which is easier than trying to relate to a white canvas. Further when he paints over this undercolour the dark tone shows through, not white canvas. After covering his canvas, he generally starts painting at the focal point (in this case the moon and background). After adding the sky he painted the moon “a nice warm golden colour, which gives me something to relate to. It sets the key.”

“After painting the focal point, you’ll be surprised how much stuff you can leave out and you get a stronger painting.” Using some thicker paint Kasey then modelled the middle area. “I use a small brush for some vertical strokes, little verticals work nicely. Look to break horizontals and verticals at the correct places. Sometimes nature provides this or I will add things.”

“Talk to your painting. What’s it telling you? You can destroy lively areas in painting because they don’t look like the subject, but you need to learn to recognize a lively image in a painting and leave it. Avoid small shadows, they can become a bit busy. Squint your eyes down and look at the subject . This then eliminates the small dots.” Kasey particularly loves lost and found edges “just feel it in there”.

Coming forward in the painting, Kasey used bluey grey greens for the dark foreground, adding cadmium yellow to make it a bit richer and help it to come forward. “The cooler underpainting coming through really helps.” “Always be aware of the direction of the sun, and keep the direction of the values light to dark consistent with that direction.”

As there was some purple in the sky, Kasey used the same sort of purple colour running throughout the painting – “it gives one feeling in the painting, harmonizes it.”

Above all, Kasey advises: “Don’t be scared – if you think something might work have a go at it. If it doesn’t work you can rework it.”

You’ll see from the photos what a fabulous painting emerged during the course of the demonstration. If anyone wishes to learn more, Kasey Sealy will be taking an Italian workshop based in Tuscany during September 2016. For more information visit his website at www.kaseysealy.com.au

He has had 6 solo exhibitions in London and has been represented at major London Art Fairs, such as ‘Olympia’ where a record price of 18,000 pounds was established for a major canvas in 2002. He has been commissioned by the American Australian Association to provide works, painted and presented as awards to Greg Norman and Andrew Liveris, president of Dow Chemical Co USA, and Paul Anderson, ex CEO BHP and present CEO of Duke Energy in America. Commissions for 2007 include Chip Goodyear, ex CEO BHP & James McInerney, Vice President of Boeing Air USA Kasey was selected for the Ingles equestrian Prize 2012 Kasey’s a Learn to Paint “Visions in Oils” was published in 2012
Kasey’s book “The Art of Kasey Sealy” was published in 1993.

He has also produced 5 educational; learn to paint Videos/DVD’s.
His paintings have been shown as a major prize on popular Australian TV game shows, on numerous occasions.
His articles on painting are regularly published in Australian Artist magazine as well as the International artist.
In 2013 Kasey appeared in the ABC Landline documentary called “Brush Strokes”.

Kasey has painted in many overseas countries, including UK, France, Venice, Italy & USA. He still manages regular painting trips around Australia, as his love of the Australian bush is the source of much of his inspiration. He was previously a regular lecturer at Charles Sturt University in Bathurst, but now holds tutorials for Art Society members, throughout Australia, and holds his own home tutorials in his studio. Kasey states: “My work is a direct influence of the impressionist style of painting with a direct hand eye co ordination in front of the subject trying to capture the subtleties of mood, light and atmosphere, always trying to avoid any formulation, sentimentality and cliché, giving the individual viewer a unique visual experience every time”. (Kasey)