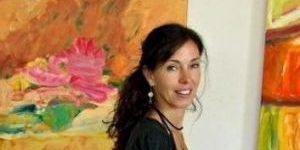 For our “Melbourne Cup” November meeting, our guest speaker, Jo Bertini, took us travelling –not with horses but with camels.

For the past 10 years, Jo has been expedition artist for Australian Desert Expeditions (ADE),
accompanying scientists into remote, unnamed corners of the Gibson, Simpson and Central
deserts. “We go into the desert with two strings of camels – up to 25 camels – and we walk for
up to 3 months. We take a group of scientists – up to 20 people, but maybe as few as 4.”
“When you walk you start to see the ecology of the country…you uncover information about a
site because you don’t miss things when you are walking.”
Jo turns an artist’s eye on everything. She is often asked “Why not a camera?”
“Every artist, whether photographer, painter or draughtsman, has a particular eye” Jo explains.
Jo records what she is asked to record by the scientists but also draws and records whatever
takes her eye. She is constantly walking and working.
On her return Jo sorts through her sketches in order to create large oil paintings. (She is
represented by the Olsen Irwin Gallery in Sydney and MARS Gallery in Melbourne).
“I have to be able to carry everything. The camels carry essentials. Luggage is very restricted.”
Jo carries her materials in a backpack. She carries gouache (the small screw together gouache
pans), pencils, brushes. The heaviest thing I take is paper, sketchbooks”.
Jo was also invited by the Scientific American Research Institute to a 3 year residency in
Arizona, New Mexico.
Her photographs of this area (Georgia O’Keefe country) were dramatic. She found parallels
with the Australian desert, but also contrasts.
“During the past summer, every afternoon it poured with rain. Flotillas of grey clouds would
come over (resulting in a) huge thunderstorm, and after 5 minutes it had all gone.” She would
cover her work with a tarp for those 5 minutes, then resume painting.
Jo then took us to the remote Kutch region in north west India – 2 years ago she was invited to
work with a not for profit organization which wanted to document the sadly disappearing
nomadic life of the Maldhari people who live in the desert with their animals.
The differing sects and tribes would not allow photography and would not feel comfortable with
a man amongst the women, so the not for profit organization wanted a woman who could draw
and paint.
“I was a last witness to document their lives – witnessing the end of these people”. The work
she has produced from this trip will be exhibited in a museum opening in New Delhi in
December. This will hopefully raise some awareness of their plight.
Jo also brought along her book “Fieldwork” which many of us bought, being a selection of Jo’s
works made whilst on expedition.
Thanks Jo for a very interesting evening.                       Thomasin Graham

The first night the Australian painter Jo Bertini spent in the Central Desert she was sleepless, kept awake by a repetitive drum beat.

“I just kept thinking, ‘I can’t sleep, will they stop that? What is that noise? Is that a generator?’ ” Come morning, she approached expedition leader Andrew Harper.

He glanced at Robyn Davidson, the adventurer and author ofTracks whom Bertini had come to meet before painting her portrait, and they laughed. So deep was the silence and stillness of the desert, Bertini had been jumping at the sound of her own blood pumping. The next night Bertini folded down her swag and slept facing the night sky.

“I remember when I was little my mum used to say to me all the time when she put me to bed, “All I want for you is peace,” Bertini says.

“And I never understood it, but she used to say it all the time, ‘I just want you to be peaceful’, because she could see the restlessness in me, the creative drive and the creative instinct. Every mo 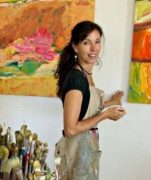 ther wants that for a child, don’t we? And that’s where I find peace. The desert is where I want to die.”