Guest Artist for the May 2018 meeting- Alan Lloyd – NSWAG Conservation 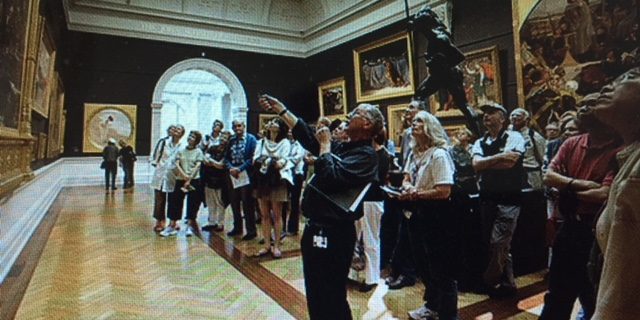 Our Guest Speaker for the KAS May 2018 meeting – Alan Lloyd – Retired Head of Conservation NSWAG.

At our May general meeting we listened to a relaxed and informative talk from Alan Lloyd – a
Fine Art Conservator – and learned about the varied and important task of art conservation.
Alan was employed by the Art Gallery of NSW for 45 years, 31 years of which he was the head
of the conservation department. As such he had the huge responsibility of caring for the overall
safety of the collection and for pictures in special exhibitions.
Alan grew up in Wangi Wangi. A bloke called Bill Dobell – “the guy down the road who painted”
– spent a whole afternoon showing him his studio. Bill Dobell told Alan that anyone can do art
if they try, but practice makes perfect. “Do as much as you can. Try different media, but the
bottom line is, get formal training.”
In those days, the Art Gallery of NSW (ie not just of Sydney) sent a restorer to Newcastle to
check on the paintings (this was before Newcastle had an art gallery of its own.) Alan described
to him his background in practical skills like carpentry and technical drawing, as well as in art.
“They are the skills I want” said the restorer and gave Alan a job.
Materials over the years have varied. The post war artists such as Grace Cossington Smith
and Roy de Maistre often painted on cardboard, as that was all they could get at the time.
In the 60s, Masonite became available and Dobell, Drysdale, Olsen all used it.
“The most durable paintings of all I have worked on are those painted on Masonite. There are
no cracks and the paint doesn’t flake off.”
Its downside is its weight, but it is still a product worth considering.
Alan discussed the lesser quality of cheap Chinese canvas and canvas boards (which he
favours because you can’t punch holes through them).
U.V filtering Perspex is used by the AGNSW for all works except those using unbound
pigments (eg charcoal). No works in unbound pigments will be lent out for travel.
Small scratches can be repaired in Perspex using toothpaste or cleaning products which are
only slightly abrasive. Not Brasso.
Alan described the many and varied ways works on paper have been treated. Sometimes you
find a nice mount on the front of a work, and corrugated cardboard on the back.
If you have an older work and want to check if it is mounted with acid free paper, check the
bevel. If it is acid free, the bevel colour will be the same as the mount. If not, the bevel will
have turned brown.
Rapid change in temperature and humidity is very bad for paintings. Alan described the fun
and games they would have in organizing aeroplane transportation.
Watercolours and similar are very light sensitive. In the Asian Gallery at AGNSW for example,
there is a low light and they apply the 3 3 rule – each work can only be exposed to light for 3
months every 3 years. The collection is always being changed for that reason.
We all found this talk extremely interesting particularly as most of us know so little about this
area.
Thank you Alan.
Thomasin Graham

How a “boy from Wangi ‘  ended up as Head of conservation at AGNSW.

Wangi is situated on the western side of Lake Macquarie ..just south of Newcastle .

This meant he had to travel for 2 hours to/from school each day !   For 6 years . He got his Leaving certificate in 1960

At that time it was extremely hard to get employment .  Eventually he managed to get a boring  job as a Clerk at Newcastle Gas Company .  (. which he did for 3 years )

Which meant he had to still commute 2 hours each way ..but by this time he was used to it .!

Alan enrolled in an introductory painting course cat Newcastle technical College ..he did that for  one night per week for 3 years .

In 1969 he did a 6 month  post grad internship  at The Victoria and Albert museum in London .

From there he did a 6 week internship at the National Library in Florence, Italy .

Alan returned to the Art Gallery of NSW. .

In 1977 his boss, Bill Boustead , retired .  Alan was promoted to the position of HEAD OF CONSERVATION.  .  He filled this position until his retirement at the end of 2008 .

In addition to that position he was EXHIBITIONS CONSERVATOR.  ..meaning he was responsible for all Conservation aspects of every exhibition touring to the Art Gallery .. a major responsibility

He was Head of Conservation for 31 years  And all up working as a conservator at AGNSW for 45 years !!

THIS IS AN ALL TIME RECORD in the entire. Staff  history for the Art Gallery .