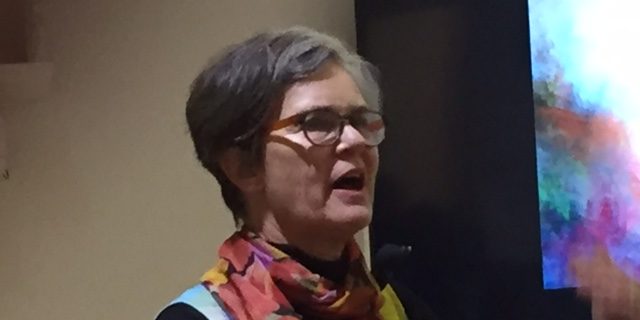 Our Guest Speaker for the KAS October 2016 Meeting was Juliet Holmes-a-Court who presented us with an animated Artist’s talk.

Our guest speaker, Juliet Holmes a Court, carried us away with her energy and enthusiasm as she shared with us her work and that of the great masters who have influenced her and other artists.

ichelangelo has a major impact on her – not the subject matter (she doesn’t often paint scenes of crucifixion) but the movement of the figures, the lilt of line, as she is a mannerist painter. Rembrandt, particularly his use of light and many layers of glazing, especially the dark glazing to throw up the light. “the big ball of light in

the sky has a magical impact so always put a cross at the top to remind yourself where is the source of light, even if your painting is an abstract it responds to light.”

Juliet looks to Caravaggio again and again and again! From him she learns about movement in composition and loves his incredible folds of fabric, the mountains and valleys of which re appear in her landscapes.

Millet demonstrates for her movement and sense of space. She notices in The Sower a

beautiful pale yellow haystack against a pale blue sky in the distance. She learns to let the eye

go on a journey – pale and against pale leading the eye. Also evident in Turner and Lloyd

Rees.–“ We don’t have to have everything punched at us.” “We have to look and look and

Bonnard – “He has tremendous softness but strong structure”, especially

framing his views with

a window. He is quoted as saying “The three most important things about painting are composition, composition and composition.”

In her series of works of imaginary bridges Juliet incorporates this softness with a sense of structure. Also in her series of gum trees – large works where she built of layers of acrylic paint on the surface of the tree trunks, then painted an oil landscape between the trees. “sometimes

getting there (ie travelling between the trees) makes it of more interest.”

by Rembrandt, also painting a side of beef. Dobell’s portrait of Margaret Olley shows inspiration

from the portraits of Soutine – a family of influence.

In her practice spanning over thirty years Juliet has copied images from these great masters,

Her portrait of Joan Campbell, with chefs scurrying the background, owes something from the

movement of figures from Michaelangelo, to the expressive portraits of Soutine

“I was learning to marry influences into my own mix.”

and sense of landscape – from the folds of Caravaggio to the light and movement of Turner.

“The most important thing is whether the work is good and true. When something is true it

‘BEING AN ARTIST is about wrestling with shape, colour, composition, and
the sheer stuff of paint, and how you can learn to work it so that it becomes your language to communicate.’ (Juliet Holmes à

This statement sums up the last 20 years of Juliet Holmes à Courts life as an artist. Her body of work pays its dues to abstraction and the idea that the surface of a picture can be a site for contemplation and self reflection, and no need not bear any deliberate relationship to the outside world. 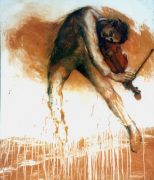