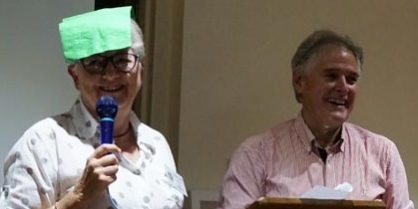 The 2016 KAS Support Team was elected and Malcolm was thanked for his past great years of service to the Society.

Newly elected President Charmaine Phillips expressed thanks to the outgoing Committee and welcomed the newly elected members. She paid tribute to Malcolm Carver for all he had achieved for the Society during his years of office, announced the award of Life Membership of the Society and presented him with an engraved glass trophy.

When I became President in 2009, I inherited a well run and vibrant Society. I mentioned though, the future would not necessarily be the same as in the past. As promised, your KAS Committee has excelled in virtually all areas: an enviable reputation amongst art societies, stronger financial resources, excellent sustainable exhibition facilities, affordable workshops with talented tutors, an outstanding website and newsletter communications, and an Anniversary Book commemorating our Golden Jubilee.

Thank you all, for entrusting the leadership role to me during these past 7 years. I am delighted to be handing over to Charmaine Phillips, an excellent future President, with predominantly the majority of the loyal, wonderful, existing committee members and supporters who have made all our achievements possible. I am immensely grateful to each and every member, who have contributed so much, as a team, to enable KAS to continue being a vibrant, exciting and successful Art Society.

Thank you for the honour and the privilege and may I wish you all every possible success, with exponential years of creative fun and enjoyment. I am proud to have become a Life Member though its just dawned, that whilst I was looking forward to parole, its now been converted to a life sentence!

Best washes in the future, Malcolm

I am really honoured to have been elected President of the Ku-ring-gai Art Society and I thank everyone who has been very supportive and encouraging. It’s not my natural instinct to be in an administrative position, but in this instance I am absolutely comfortable as I am part of a wonderful group of people who are creative, hardworking and friendly. As just one of 10 Members who form the Committee, many members in support roles, and almost 300 like-minded artists who all make the Ku-ring-gai Art Society, I am confident that we have a very solid future. It’s my intention to help grow the interests of members and the Community in the Art world.

Most of you know me but for those who don’t here is a brief back story. I live in St Ives and I am married to John, have 3 children and 4 grandchildren, all of whom are a wonderful and enthusiastic support network (especially John)! We are both retired, I from nursing and John from a career in Telecommunications. I have been creative in many fields: a stoneware and porcelain potter for 15 yrs and Member of the Central Coast Potters Society; a silk painter of clothing and accessories which sold at the Argyle Centre in the Rocks and I had a small business in high fashion clothing alterations. I discovered Botanical Art in 2003 and life hasn’t been the same since! I joined the KAS in 2007 and became an exhibiting member shortly after. In 2012 I became Workshop Manager and Vice President in 2013. I have thoroughly enjoyed all my roles within the Society and earnestly encourage all Members to become involved in any way possible. Together we make a strong, very successful and greatly admired Art Society.

The following members were elected to the 2016 Committee:

The following members were appointed in Support Rolls: