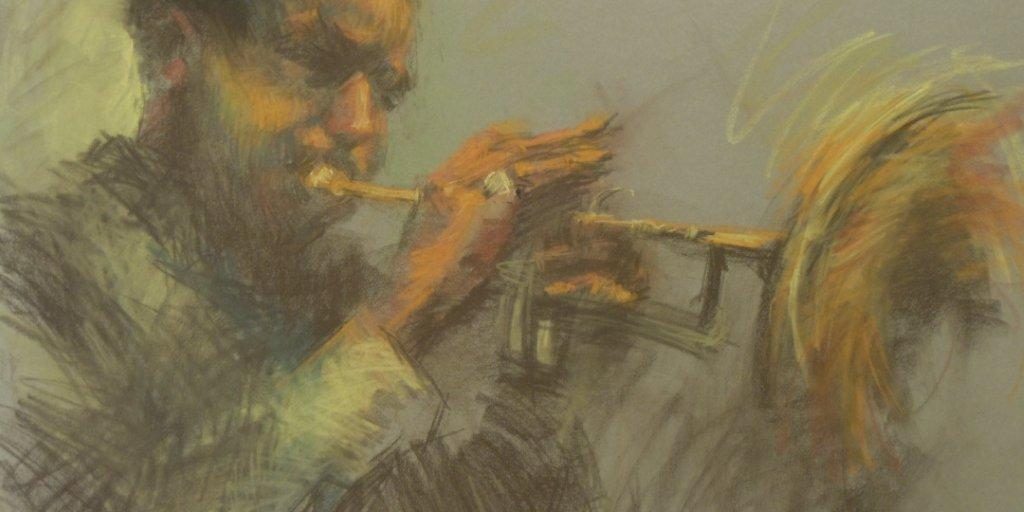 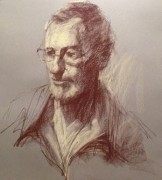 One of the most extraordinarily brave and difficult things to do, in the wonderful world of art, is to paint a portrait of someone live in front of an audience. But our guest this month, Pamela Irving, was more than up for the challenge.

After selecting her model, Pamela started her portrait using only two pastels, a dark brown and a very pale yellow, on a mid-toned Canson paper. Working slightly larger than life, and using the dark pastel, the initial forms are shaded in using broad, gentle strokes as she gradually feels her way. Any mistakes made at the beginning are generally rectified as she goes along. Slowly David’s face begins emerging. A few heavier stokes and his shirt appeared. Next, Pamela introduced the light colour, again using broad strokes with the side of the pastel, highlighting the forehead, nose and cheekbones. She leaves her glasses off as long as possible so she doesn’t get caught up in too much detail in the initial stages. Working over again with the brown, building up with more defined stokes, the eyes, glasses and mouth are brought to life. Pamela puts a minimal amount of detail into the shadow areas of the face, as she feels any more is unnecessary. A few more deft strokes to define the beard, moustache and hair and the work is complete.
Pamela then talked us through a slideshow of her favorite works, including portraits and Still Life. She prefers to limit her palette to just four colours: black, white, red and yellow ochre. She loves faces with character and really enjoys pushing that in her mostly impressionist style. We certainly saw that in her demonstration and we were privileged to see this brave and talented artist in action.

Pamela’s art work is focused on life drawing, still life and portraits in a wide range of mediums including oils, pastels and charcoal.  The theme of these works range from realism through impressionism.

Pamela has won many prizes for her art works. There is increasingly wide recognition for the talent shown in her art works in drawing and portraiture. She lectures at the Royal Art Society academy in North Sydney and leads workshops for talented young artists. She is well known in the Sydney Art community and has been an active member of the Lane Cove Art Society for ten years. 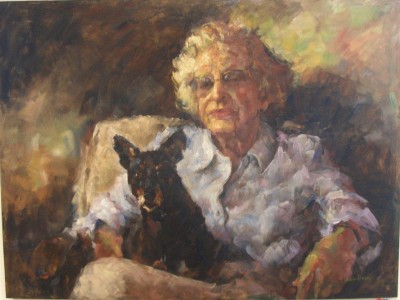 Pamela has won numerous Lane Cove Art Society awards including the Lloyd Rees Prize as well as the Le Gay Brereton Award from the Art Gallery of New South Wales and has been a finalist in major Australian National art awards including the Mortimer Prize , the Shirley Hannon Portrait Prize, and the Portia Geach Memorial Award.