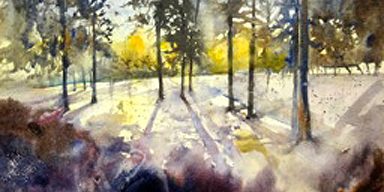 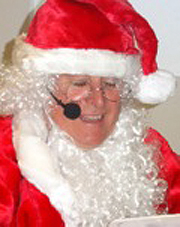 It has been traditional in recent years to invite a ‘mystery artist’ to entertain us at our December meeting. This year Santa appeared, aka Malcolm Carver, filled that role. Surprisingly enough, Santa turned out to be an adept watercolourist (“I’m not as good as Malcolm”) and announced that he would demonstrate a snow scene, something he saw a lot around the home of Santa, at the North Pole!

Malcolm told us he also had some recent personal experience of Santa’s homeland, Finland, having spent an hilarious holiday at a little place called Rovaniemi in Finland, right on the Arctic circle. He was accompanied by Doug Meares’ brother, Alan, as his buddy, and the purpose of the trip was to play with Porsche cars racing on snow and ice. This may have sounded exciting enough, but the holiday included other entertainment such as a night dogsled race ending up at an ‘ice hotel.’ The dogs fought each other and the young ones did most of the work, pulling the sleds in the -14 degree temperature. Other ‘boy’s own’ adventures included a skidoo rally at night over the hills and around the lakes.

For Malcolm, of course, no holiday could be complete without painting, so he got up early every day to sketch before heading for the workshops where the cars were waiting.

For the demonstration, Malcolm used his patent ‘star’ palette. No green of course!. Well, there wouldn’t be anything green growing in the Arctic circle, would there? He put a strip of masking tape across the paper at the horizon line and started by wetting the paper and floating in yellow on the horizon, followed by dark blue and burnt sienna at the top, gradating down.

After drying the painting, Malcolm went to work with a dagger brush, which was very versatile and could make many kinds of marks. It was a travel brush with a detachable handle to cover and protect the point. Working over the top of the dry background, he put in dark trees. Then he dipped into many colours to make a variety of greys for the foreground shadows, which led the eye into the painting’s space. A dark foreground completed the work. It is always fascinating to watch Malcolm paint, even in a sweltering Santa suit!

Thank you, Malcolm, for an entertaining evening. by Diana Hallowes 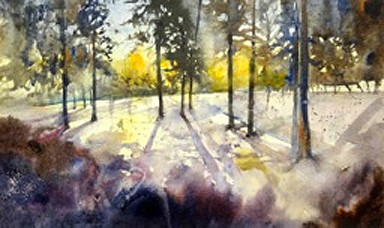