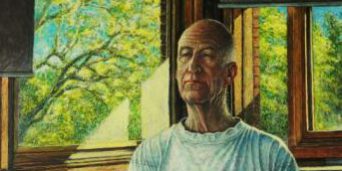 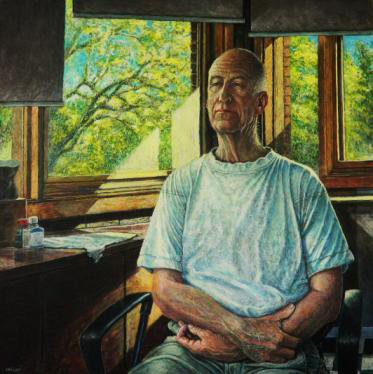 This month we were exceedingly privileged to have not only Paul, but also his friend, prominent Artist Greg Warburton at our meeting. Greg is the subject of Paul’s portrait which is in this year’s Archibald Prize (see centre pic below). Paul was ecstatic to finally have his work selected, having tried for over 15 years.

Through a series of 180 images, Paul took us on a visual journey of his life as an artist, from age15 to 57. He has always been a passionate man and as a teenager he would brave the minus 30 degree Canadian winter, to go outdoors to paint the snow scenes in watercolour. With a thermos of hot water at the ready, he had 30 seconds to paint before the water froze. Now that’s dedication to your art!

He kept experimenting with his art, dabbling briefly in egg tempera then by age 28 had moved on to large scale expressionist works in oil. These works were up to 17ft. x 7ft. and some had quite dark content. He continued in this vein up until 2007 when he had a mid-life crisis, causing him to re-evaluate his whole approach to life and his art. Paul then returned to his first love egg tempera. This was not a financially motivated decision but a spiritual one, in pursuit of aesthetic and beauty.

This technique from the Renaissance period is a challenging medium requiring not only skill and clear understanding of colour but a great deal of patience. His paintings can take from a few weeks up to 3 years to complete.

Paul has developed a wonderful aptitude for portraiture and emphasized that it is very important to have at least one live sitting with your subject, to do drawings and then photos. If possible he enjoys building a relationship with the sitter over a period of time as this enables him to have a deeper emotional connection with the person and results in a much better painting. For example, his portrait of children’s book illustrator, Graeme Byrne, took 70 sittings over 2 years during which time they really got to know each other extremely well.

Paul also works in watercolour for some of his portraits and landscapes and he draws everyday, something which he says is vital. He also uses “silverpoint” (in his case a 20 cent coin) to draw with, as opposed to lead pencil which bleeds when painted over.

Paul then gave a demonstration of how to make egg tempera and explained that white eggs and brown eggs have different oil content, which affects the surface finish. The latter, being more oily, give the painting the beautiful soft lustre that Renaissance paintings have.

To finish the evening Greg Warburton spoke about the 3 ingredients to Paul’s success. First, his technical skills, second, he is prolific, and third, without a doubt the most significant, he is PASSIONATE! Thank you Paul for sharing your passion and for a truly inspiring evening!

Paul is a finalist in the 2014 Arhibald Prize.  Congratulations, Paul!