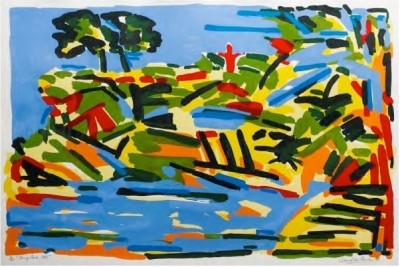 David’s love of art began at the age of 6, when his mother gave him a Reeves Watercolour Box. This precious gift had such a profound affect on him, that 46 years later, out of respect and appreciation, he presented her with a hand bound book of his paintings…one for every day of her life.

His passion for watercolour has led to him now being, the President of the Watercolour Institute of Australia (AWI), which is celebrating it’s 90th Anniversary this year. David then took us on a very detailed and insightful journey through the history of watercolour in Australia. He began with the most ancient Watercolour gallery in the world, the Thunderbirds on the rock face at Kakadu, then on to the early “Scientific Gentlemen” like Sydney Parkinson who came with Capt. Cook in 1770 and John Glover, who had the job of skilfully documenting the new world they had discovered.

Through the 1890’s when Impressionists like Streeton and Robertson formed the Heidelberg School and set up Artist’s Communities at Box Hill, Vic. and then Camp Kerlew, Little Sirius Cove, at Mosman.(see below) These “en plein air” painters, authentically captured the unique beauty of our country and this became known as the Golden Age of Australian painting. From the late 1930’s onward Albert Namatjira’s works became as much a part of Australian homes as the hills hoist, and his Granddaughter Lenie Namatjira, is the first female indigenous artist to become a member of the AWI.

The AWI was founded on 21st August, 1923 with 6 founding members who encouraged and promoted exclusively watercolour. Their first exhibition was on 25th March 1924 at the Anthony Horden’s Gallery in Sydney. It set the format for all subsequent shows down to this day and as the Institute evolves over time, it strictly adheres to the highest possible standards. (For a complete history see www.awi.com.au).

David then spoke about his own art practice which includes oils, acrylics, pen & ink as well as watercolour. His work is about mark making, which he compares to our own handwriting, it’s the way we do it individually, it starts in childhood and becomes more sophisticated over time. He still feels he sees as a child. Using bold stokes of vibrant colour he divides and captures space, then works on these areas.

He works mainly en plein air but doesn’t drive, so he is often seen on buses and ferries carrying all his gear, including large canvases! Now that’s dedication to your art!

About 2 or 3 times a year David will spend time in his studio, working from smaller works done on location, producing very large works 6ft x 8ft (183cm x 245cm). His favourite time to paint is noon. He just loves the midday sun, colours are intensified and surrounded by white.

He is inspired and influenced by American artist Jasper Johns and has an obsession with Picasso, having collected since childhood, nearly 200 books about him.

Thank you David for an educational and inspiring evening.