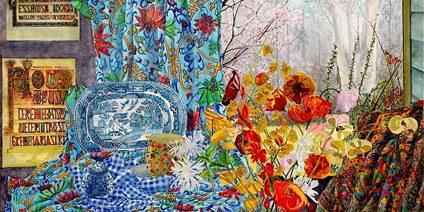 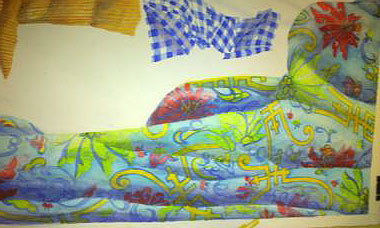 From childhood, Graham has always been an artist. According to his father it was the only thing that he could do, so at 17 he went to Art School where he studied painting and printmaking. He graduated with a BA and MA, both with Honours. While his training was very academic, he found the mid 60’s to be a very exciting time to be involved in the Art world as things were rapidly changing, exposing him to confronting ideas about what art is or could be.

Graham first came to Australia from England, in 1978 as a visiting artist at the Victorian College of Arts, Melbourne and fell in love with it. He then relocated here in 1981, finding work at the Art School, University of Western Sydney, where he taught for 21 years. He quit full-time teaching in 2003 to pursue his first love painting (watercolour and oil) and print-making and he hasn’t looked back.

Graham’s passion has always been Still Life. He just loves the mechanics of it – composition, shape, colour, light and technique. He is obsessed with patterns, fabric, flowers and gardens, which are the basis for all his works. In fact, he loves gardens so much he has travelled America, Europe and Britain just painting gardens. He also has a great catalogue of intricately patterned and colourful fabrics, china and old manuscripts which he has collected over many years and continually re-uses, as he loves the details and the challenge they present.

While showing slides of his works Graham generously described his methods. He works on several works at one time, a mix of oil, watercolour and printmaking. When working with oils, he uses transparent glazes like watercolour, layer upon layer and it takes days to dry. Also, with some printmaking processes you have to wait for long periods, so during this time, he thinks about other works and develops them in tandem. Sometimes he gets quite obsessed and will do 2 or 3 of the same thing. An example of this is his beautiful ‘Poppies’ series. He also finds it exciting to do the same work in different mediums, but he emphasised the common denominator for all mediums is drawing. He uses 2B pencil on hot-pressed paper and does tight linear drawings as the basis for all his works.

Graham concluded his talk with a fascinating watercolour demonstration of how he does the folds in his intricate fabrics. In a style similar to Japanese woodblock, he first of all draws the pattern and then paints the patterns flat. He then mixes a neutral colour and delicately adds the shadow over the top, blending layer over layer until the desired effect is achieved. Amazingly Graham is a self-taught water-colourist as it was never taught at the College he attended. A friend gave him a set in the early 80’s and he went out every day, painting en plein air and things just progressed from there to the incredibly accomplished artist standing before us today.

Thank you, Graham for sharing your wonderful talent with us.

To see more of these stunning works go to www.grahammarchant.com.au 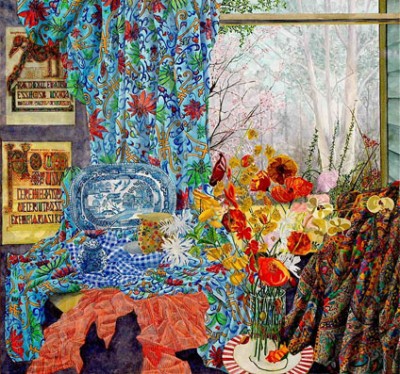