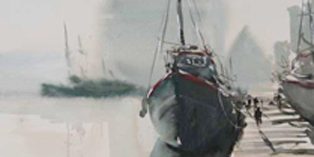 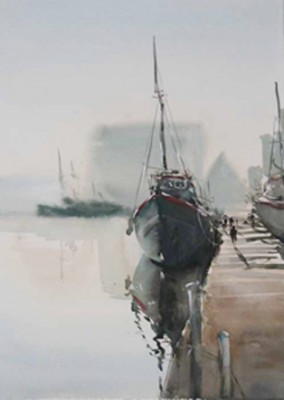 Chan Dissanayake was born in Sri Lanka to an  artistic family, his father an internationally acclaimed  film director and his mother an art teacher.  He migrated with his family to Australia in 1986. A  talent for drawing was recognised in pre-school  days and a passion for art, especially for watercolours,  kept him actively involved. He studied watercolour  painting with renowned Australian artists  embarking on a journey of self-discovery.

Achieving rapid success and winning many major  awards, he has gained a considerable reputation  as an outstanding watercolour artist. His solo exhibition ‘Cool Waters’ held in October 2010 was a  sell-out. In 2011 and 2012, he was invited as a  tutor at the Summer Art Experience run by the Artists  society of Canberra.Chan was named the winner  of the Agricultural Heritage Prize and the overall  Champion Exhibit at the Royal Canberra Show  in 2013.

His works are highly sought after in local and regional  galleries. Currently his work is represented  at the Bungendore woodworks gallery. Chan said  “My works represent my inner response to the  world around me. As an artist, my aim is to capture  an impression of my subject with as little detail as  possible. This is done by simplifying the subject  matter to its core elements. I find that watercolour  is a tailor made medium for this purpose.  Watercolour is a demanding medium. It is paramount  that one learns the language of watercolour.  Only then you can command it to do its magic for  you.”

Chan had dabbled in a number of mediums over the years, but he got bitten by the Watercolour Bug and the rest is history. He has now been painting in watercolour for 12 years and loves every minute of it. Even though his work is impressionist – spontaneous and suggestive, he feels that the key to any successful painting is good drawing. It is essential to have a quick accurate sketch before putting paint on paper. He started attending Life drawing classes 15 years ago and goes at least once a week. He also draws in his sketchbook every day, as this keeps his creativity flowing.

In order to have fresh and exciting works, Chan believes in having an open mind set and going outside your comfort zone to tackle different subjects. When picking subjects to paint, he looks for ones in which he can easily utilize washes, letting the watercolour do its own thing! He doesn’t want to overpower it or force it to do what he wants.

Generally he does small watercolour sketches on location and eventually turns them into full size works. He only uses photos he has taken himself and only as a reference, not to be laboriously copied. Rather than be analytical, he just lets the creative process happen. He also looks less at the subject and works more with how he feels about it. 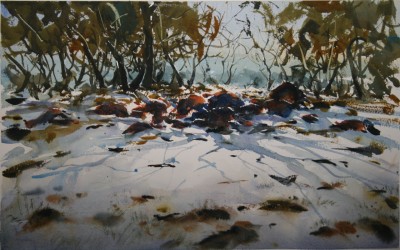 Chan then gave us a lively demonstration of how he makes his magic happen. Using a photo of a snow scene, he quickly sketched the main elements that defined the scene and said it is important to find the one thing to dominate the scene. As he adeptly applied paint to paper, he explained that watercolour is all about variation in size, shape and tone and that the process is a key factor. He spends as much time in the planning stage (composition, tonal and colour studies) as he does in actually painting. He finds that when he does this, the final work just flows and is executed quickly.

As his brushes danced across the paper, the scene quickly came to life. When painting trees, he said not to paint them the way they grow, from the ground up, but to start with the big foliage first then add the trunks and branches later. Make them different sizes and angles in a type of pattern (don’t copy exactly what’s in front of you) and when its dry scratch out a few highlights with your fingernail. Shadows are crucial, they should be horizontal in the background and vertical in the foreground and should always follow the contours of the ground. Chan had one long shadow that dominated both the trees and the rocks, he then related all the rest to it, giving the work a cohesive flowing energy. He emphasised that he only works with Secondary and Tertiary colours and neutrals because “nature’s colours” don’t come out of a tube. The scene when finished, was fresh and sparkling, you could feel the crisp cold air on a beautiful sunny day in the Snowy Mountains. 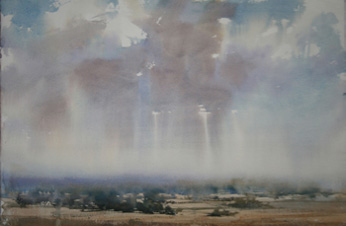 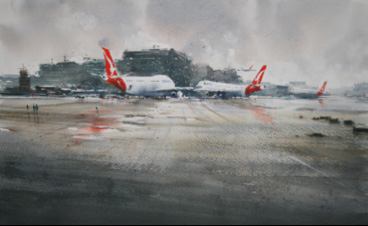 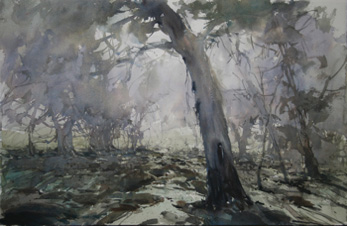