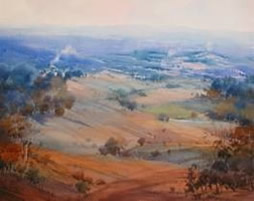 Josefia is a figure / portrait / landscape painter in watercolour and oils.

In the early 1990s, her first workshop at the Mitchell School of Creative Arts, Charles Sturt University, Bathurst was instrumental in her decision to pursue a new career in art. After a period of full-time work and part-time study, Josefia enrolled full-time at the Julian Ashton Art School in 1996. In 1997 she was awarded the Thea Proctor Scholarship and she completed a Diploma of Fine Art in 1999.

She is member of a number of art societies including being a member of the Australian Watercolour Institute since 2004 and the Portrait Artists Australia since 2002.

Josefia has won over 50 prizes and awards in oils and watercolour. She has been a finalist in the Portia Geach Memorial Award, Berkelouw Portrait Prize, and the Shirley Hannan National Portrait Awards.

She has participated in group exhibitions in Australia, Korea, Mexico, Taiwan and China.

It is always a great pleasure to watch AWI member Josefia Lemon demonstrate her mastery with watercolour. Originally from Indonesia, she is a multi award-winning artist and has been a finalist in many landscape and portrait prizes. She completed a diploma in fine arts at Julian Ashton Art School in 1999 after a career as a legal secretary and began teaching there the following year.
Josefia showed us a series of slides of her self-described quirky easel paintings. These often have figures and use various symbols to represent ideas. ‘Time Doesn’t Matter’ is a portrait of an old lady who is still full of energy at 91 years. All the clocks are set at 11.00 representing the eleventh hour of her life, yet to her time is irrelevant. This portrait was a Portia Geach finalist.
Another painting was inspired by a personal experience of a torn retina. Fortunately she was able to see a specialist quickly and have the eye treated, but the painting called ‘Captured Vision’ shows her holding a picture of her right eye literally grabbing her vision back.
The demonstrating paintings were done in watercolour. Josefia’s watercolours are usually inspired by photographs as a starting point but she changes the mood or the time of day to create a sense of tranquility. She does many landscapes and miniatures and works quickly with a fairly traditional palette of colours including but not limited to cadmium red, cobalt blue, cerulean, magenta, alizarin crimson, Prussian blue, sap green, viridian, cobalt turquoise, permanent rose, raw umber, yellow ochre, ultramarine, quinacridone gold, a purple and burnt sienna. The first painting was based on a photo taken in a landscape near Orange. She creates a first wash over the whole sheet of paper to represent the sky and warm up the foreground. Blending cobalt and rose in the top 1/3, then grey made from cerulean and raw umber through the middle then gold in the foreground with a large mop brush with pre-prepared colours. Once this was dried off she began brushing in the distant mountains and distant trees. Shadows were added to the distant trees and the painting was built up working gradually down the page. As she moved closer to the foreground she deepened the tones and warmed up the colours. Finally she switched to a rigger brush to add the branches to the closest trees.
The second demonstration was based on a photo of an area around Mosman. Once again the first wash covered most of the paper. The next wash used stronger colour with a dry-brush approach to very effectively give the impression of distant houses as the brush skipped across the surface of the paper. A large area of water was painted in with cerulean and cobalt and the foreground trees were painted in a thicker dark mixture to give full atmospheric perspective.
Wonderful demonstration and great paintings as always. Jane Blundell