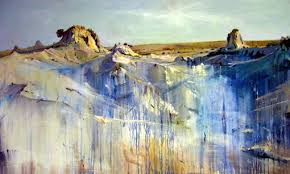 Joseph Bezzina (FRAS)  is a multi awarded Sydney based acrylic artist. He holds  an Advanced Creative Fine Arts Certificate and Statement  of Attainment in Skills and Practices in Fine Arts.  While studying for his certificate Joseph received the  Highest Achievement Award and five Distinctions. Joseph  is also a Fellow of the Royal Art Society NSW  (RAS) and a teacher at the Royal Art Society School.

Joseph has won the UTA Paint Your Way to Paris,  Wagga Wagga Art Prize, North Sydney Prize and Camberwell  Rotary Prize. He is the recipient of the Royal Art  Society Medal of Distinction and the Thora Ungar Memorial  Award. Joseph has also exhibited as a Finalist in  major art prizes such as Mosman Art Prize, Salon des  Refus’es, Paddington Art Prize, Mount Eyre Vineyard  Prize and the NSW Parliament Plein Air Prize in  2008,9,&10.

In his own words …  My attachment with the landscape has always presented  me with a rich source of subject matter. What  has changed with my artwork over the years is more  about the isolation, colour and the underlying lines and  shapes that run through our landscape. When I paint en  plein air it reinvigorates the mind to see and capture, in a  more fleeting way, the light, atmosphere and movement  in the land before me.  What art means to me can best be summed up by Piet  Monadrian who said “The position of the artist is humble.  He is essentially a channel.”

Joseph Bezzina has been selected as a finalist in the  2013 prize for his painting “Working Harbour – Waverton  Coal Loader” (left). The North Sydney Art Prize is an  annual event to showcase Contemporary artworks from  selected artists responding to the curatorial theme of  Toward 2020.

We were delighted to welcome Joe Bezzina, Fellow and much loved and respected teacher at the Royal Art Society, as our Guest Artist for October.

Joe brought with him a number of paintings for us to look at, including the major landscape on canvas “Fragile Ground Mungo”, a grouping of beautiful, small plein air works in a horizontal frame and some unframed paintings on paper which we could examine close up. Joe teaches outdoor landscape and he bases his own art practice on plein air work; he told us he had loved the country since he was a child travelling with his parents.
He said that he had studied under Allan Hansen in his formative years and that winning the competition “Paint your way to Paris” was a turning point in his career. He has always been an admirer of Fred Williams, whose work is still an important influence.

Joe discussed his process as he showed us a number of his works on screen. He works in oils and acrylics, most of his current work being done in acrylics. He likes to start with a full coat of transparent gesso. His multi-layered works can include random pourings using spreader medium and binder, calligraphic markings, scrapings and more washes. He spoke of painting as “bringing order from chaos” and said that he likes to work fairly rapidly. Sometimes he leaves the sky till last to cut back in and create drama.

Outback places like Lake Mungo, Ormiston, Glen Helen and the Larapinto trail come to vibrant life in Joe’s paintings as he responds to the mood and looks for lines and markings and the angles of cliff faces. On site works tell a story, juxtaposed against each other in a grouping.

Turning to his painting set-up, Joe began work on a large, partially completed painting on canvas. How lucky we were to be able to watch him in action!
Colours Joe uses include crimson, phthalo green, cobalt blue, paynes grey, dioxazine purple, raw sienna and ash pink. He seldom uses burnt sienna, a colour many artists rely on. He adds binder to water, and also uses mediums such as matt and gloss. We watch as he starts work on the sky with a wide brush.
Joe puts a lot of energy into the work at this stage, moving from one area to another and not staying too long in one part of the work. He walks backward and forward to look and attacks the canvas with scrapings of the palette knife. Taking off is as important as putting on – revealing what is beneath. He sprays the paints to stop them drying out. He often picks up a mix of colours on the brush and brings the colours used in the ground into the sky as well to create unity.

It is time to stop and think. How important it is to think about what you want and what you are trying to do – before you start and during the process.

As the painting progresses, Joe puts on white tree trunks, looking at the angles – how they lean. He scratches into the paint with his thumbnail, telling us how Turner used to do that.

We could watch Joe all night, but the time comes when we have to end things. A few more questions: outdoors he keeps his colours moist in screw top containers; as well as canvas, he works on 600 gsm paper, which he does not prepare.

He likes to work hard and fast and not have too many rules.   Thank you, Joe, for a very generous and entertaining evening and a useful lesson.