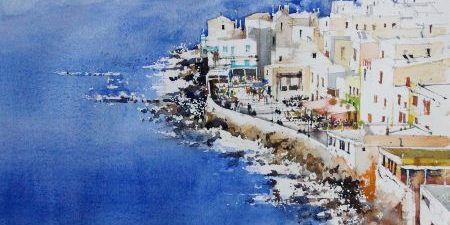 Malcolm Carver, our President, is having a solo exhibition ‘Greek Islands’ – Watercolour Paintings and Sketchbook,  5th – 30th May 2015

Following the success of his previous solo exhibitions, Malcolm Carver continues to capture the essence of his travels with captivating watercolour paintings and drawings. This exhibition includes over 60 works from a few trips which first began in 1975 to the more recent expedition to the Greek islands in April 2014. This latter trip was focused on the Dodecanese Islands, a group to the south east near Turkey, which are delightfully less busy than the well known islands such as Santorini and Mykonos. A sketchbook which includes all the works in this exhibition is also available.

Malcolm Carver is an Architect and former Principal of Scott Carver Pty Ltd, a Sydney based architectural practice.He is now obsessed with watercolour painting, drawing and teaching around the world in workshops, whilst constantly travelling in search of new images.

His passion for architecture is only matched by a keen interest in sketching, painting, video and photography. With an eye for detail in buildings and a fascination with light, Malcolm is increasingly pursuing the immediacy of painting to bring life and richness to his art. He draws and paints constantly with an immense passion always seeking to communicate graphically and capture the essence.

Malcolm’s paintings are highly acclaimed and his work has been exhibited in many solo exhibitions in Sydney. Past exhibitions have included Italy, China, North Africa, Paddington and Hill End. He became a member of the Australian Watercolour Institute in January 2007 and has exhibited annually with the AWI, both overseas and in many group exhibitions. Malcolm has won numerous awards for his work and is highly regarded in collections around the world.