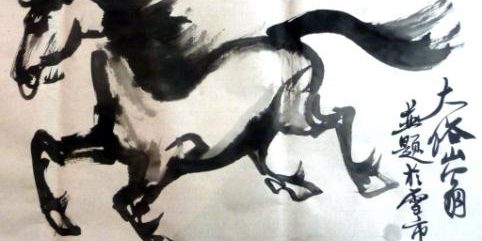 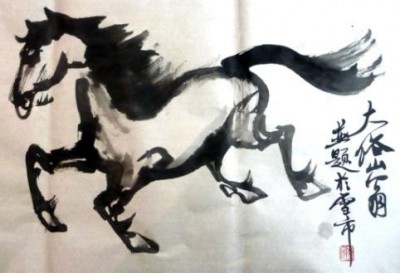 Franz took us on a wonderful cultural journey starting with the evolution of Chinese calligraphy. The earliest writing, dating from about 13c BC, was in the form of pictograms which were carved onto the back of turtle shells. Through the use of diagrams Franz showed how these symbolic pictures changed over the centuries to become the ‘characters’ or ‘words’ used today. The Chinese language does not have an alphabet or spelling but each single character consists of ‘strokes’, carrying individual meaning. There are 8 basic stokes which are to be done in a specific order involving 6 steps. There are also 2 forms of writing, the basic or ‘formal’ and ‘action’, but one has to master the ‘formal’ script before attempting the ‘action’. Franz then moved onto show how the delicate brush strokes used in calligraphy are transferred into a painting.

As this is the Year of the Horse, he has been drawing and painting lots of them, so it was only natural that he demonstrate for us how it’s done. With a few deft strokes and in less than a minute, a beautiful horse in full stride, appeared on the page. His aim was not to create a realist image of a horse, but to capture it’s movement. He explained that there is a strong relationship between calligraphy and painting, the same brush is used for both, just a difference in size. Also the same ink is used for both, with calligraphy all black is used, whereas in painting, tones are played with. Each painting no matter how big or small, always has an inscription included, which consists of the artist’s brush name, the location where the work was done and a red seal. The placement of both the inscription and seal, form part of the composition of the work, so there is always the combination of calligraphy with painting. He explained that the ‘seal’ or ‘Name Seal’ confirms this is the genuine work of the artist.

Franz also brought along a number of works to show the versatility of this medium. Not only did he have traditional delicate watercolours on ricepaper, but also works on paper fans, lanterns and Japanese Gold foil.

All of Franz’s works, including his demonstration pieces, were breathtakingly beautiful and along with his cheeky sense of humour, made it an uplifting and enlightening evening.

Franz will be conducting a calligraphy workshop  for KAS on 13th September 2014 – click here for more information.